Cricket365.com has an interesting Q&A with Neil Johnson:

Former Zimbabwean allrounder Neil Johnson displayed in England’s opening tour game against the Nicky Oppenheimer XI that he could still wield the willow with devastating effect.

The 34-year-old left-hander chats to exclusively C365 about the potency of the England attack, South Africa’s chances in PE and about his good friend Heath Streak.

Q) What was it like facing a quality new ball attack in the shape of Steve Harmison and Matthew Hoggard again?

A) Hey, man it was damn exciting!, They have a good side, their bowlers are real quality. They hit the right areas all the time. They have improved in leaps and bounds since the last time I played them.

Q) Do you reckon it is an attack that will trouble South Africa in the first Test in Port Elizabeth?

A) No doubt, this side is right at the top of their game. They could match any team in the world at the moment – even Australia!

A) Harmison, without a shadow of the doubt. He’s got serious pace. Our boys haven’t faced anything like him. But you should not rule out Hoggard as well because he swings the ball at a lively pace. Andrew Flintoff also hits the deck hard, while Simon Jones is quick as anybody. With Ashley Giles also improving, they have a quality allround attack.

Q) Which team would you place a small wager on to win the first Test at St.Georges Park?

A) Ha,ha, ha Firstly, we as players are not allowed to bet on the match, but England should definitely be regarded as favourites. South Africa are still, however, playing at home where they have been traditionally strong so I have to go with them for the first Test.

Q) Your former Zimbabwean skipper Heath Streak also played at Randjiesfontein. Does he have any ambitions of still representing his country of birth?

A) Heath is an unbelievable character. He is still very passionate about Zimbabwean cricket and will relish the opportunity to return once all the problems are sorted out properly.

Q) A major reason for South Africa’s recent decline in both forms of the game has been placed at the feet of the weak domestic structure that has been in operation for the past few seasons. Has there been a marked improvement in the game since it reverted back to the strength-vs-strength system this season?

A) Provincial cricket was dying a slow death in South Africa. It was crazy that there were so many players of average standard, but now the standard of cricket is really getting better again.

Q) Are there any young players with either bat or ball coming through this system that might surprise the English like spinner Paul Adams did nine years ago against Mike Atherton’s tourists?

A) There are definitely some players looking to raise their game, such as Hashim Amla, Zander de Bruyn and also JP Duminy. Hashim especially I think is going to be the surprise package against England. He’s very gusty, gets into line well and has the temperament.

Q) South African skipper Graeme Smith does not captain Western Province/Boland – the same regional outfit that you represent. Do you think it would be beneficial for him to lead his province in order to gain more experience in the job?

A) He’s still young and sometimes it’s nice just to come back from the pressures of international tour and have a hit for your provincial outfit. However, he needs to learn as much about the art of captaincy as he can, but at the end of the day it’s up to the administrators.

Q) Do you still lie in bed at night and think back to that glorious innings of 132 not out in the Super Six match of the 1999 World Cup against Australia at Lords?

A) Ha, ha, ha! Nah, it’s been so long ago, but I still get flashes of it every time I hit the ball sweetly through the covers.

Q) Does Neil Johnson still have any personal ambitions to fulfill before he lays the willow to rest?

A) What you talking about? I still have great desire to play for South Africa!

England are just about to complete a 4 nil whitewash over Zimbabwe. Job done, England – get out of there ASAP and get over to SA for the serious business.

This is my tenth year of following Cricket. I haven’t missed many matches, perhaps 5 or 6, and I can’t remember any sporting situation so disasterous as the one England finds itself in currently. Michael Vaughan, as was rumoured yesterday will – in the event of Mugabe appearing at any of the matches – walk his side off the field, and the tour will be officially over. Apparently, the ECB are rapidly sourcing some backup funds (how the Cricketing Administration of the world would love to be Football Administrators – if only for a day!) in the event of a financial backlash (ZCU asking for compensation, that sort of thing). Utter mess. Countdown to ODI1, 7 hours (starts 07.30ish GMT).

4-0 please England. Nothing less do you deserve. 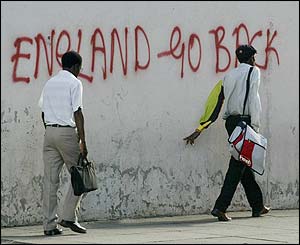 In a wall in Zimbabwe.

OK so England will play their first ODI against Zim on Sunday in Harare. The ZCU complained of the severe financial loss they would concede at the loss of one of the matches (20%). England’s reply? Time has been wasted, and it’s not our fault – my God, is this the ECB actually making a point for once?

Looks like England’s tour of Zimbabwe is back on.

The Zimbabwe government said it had lifted the ban and blamed the delay on insufficient information being provided by the journalists.

What information was delayed? One of the most confusing and ridiculous things about this media ban was Mugabe didn’t refuse The Daily Mail. They’ve been one of the most aggressive and leading anti-Mugabe newspapers – perhaps Mr Mugabe confused the amount of content being written about his regime/govenment as being complimentary.

England, as has been announced in the newswires, has cancelled their flight to Harare. They took a flight from Namibia to Johannesburg where they will now be sat twiddling their thumbs.

What next? Surely the tour is on the verge of being cancelled now. But what an utter mess – a sad day for Cricket and sport in general.

Well, the rumblings of the Eng-Zim tour “rumble” on this morning. Jonathan Agnew is obviously quite bitter at having been banned entering Zimbabwe, and makes some interesting comments on his BBC column:

No one has run a more vehement anti-Zimbabwe campaign over several years than the Daily Mail, yet all three journalists from that organisation who applied for accreditation have been accepted!

I can’t even find it amusing any longer – this HAS TO BE CALLED OFF. It’s amoral, wrong and damaging English Cricket. Tony Blair and the British Government say it’s down to the ECB and ICC – how can it be? They’re Cricket authorities, not political departments.

On a similar note, I’m sure I read recently that England have been “forced” to host Zim for a Test series. I’ll have to do some digging, can’t find the link, but I’m sure I read this.

This farcial tour is now, according to the BBC, not going to be covered by a number of journalists: [via BBC]

The Zimbabwe government has denied access to the Times, Telegraph, Sun, Mirror and their Sunday versions.

Nothing else to add.

England started “ok” against Namibia. Considering it was their first match for several weeks, I think they did okay. But, as Scyld Berry commented recently, Anderson really needs to start performing as a new-ball bowler. (thankfully I think he’s done just that today in the 2nd match).