Another cheeky piece of photoshopping from Mike who has created an alternative front cover for Duncan Fletcher’s autobiography, Behind the Shades.

What company does Duncan Fletcher keep? Well it’s certainly not with Ian Botham, Geoff Boycott as we’ve found out today. But here’s his book, on Amazon’s bestsellers nestled between a weighty-looking tome of Life in the UK (hmm) and There was an old lady who swallowed a fly. It’s 127th at the moment and could well be in the top 10 if the Daily Mail continues to serialise it. My copy’s about to land on my desk too, which is thoroughly exciting.

I remember bumping into Simon Lister, friend of the blog and all-round good egg, at Lord’s the summer before last. He told me he was writing Clive Lloyd’s biography…and it’s finally rolled off the printers (buy

Supercat is its appropriate title and, although the old mantra rings loud in my ears, I do love the front cover. Here’s a short synopsis:

The book draws on candid and intimate conversations with Clive Lloyd, as well as interviews with many of the great names of West Indian and world cricket.

Clive talks about growing up in the Caribbean, about slavery and race, about coming to England to play for Lancashire, about captaincy, about the changes he has witnessed in the game and about the present state of West Indian cricket. He has much to say, and it is always thoughtful and authoritative.

Yours for a tenner. 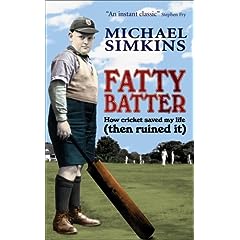 “Never judge a book by its cover,” my Dad (and probably most others in the world) used to say. Maybe due to the rebel in me, or youthful naivety, I thought he was speaking in tongues again. Yes yes, the contents are what’s most important, but I’ve always maintained that if the cover is good, the insides must be even better. That’s right: I am that stupid. Pillock though I am, my methods haven’t yet let me down.

This book isn’t one of them, but it might as well be. I’ve seen it lying on my boss’s desk and it’s only a matter of time before I wade through it. And Patrick’s reviewed it for the paper, in which he says:

THERE IS SOMETHING almost autistic about cricket lovers. Not those who can actually play. Nor the Barmy Army types, whose main purpose at a match, it appears, is to tell fellow spectators in a beer-soaked caterwaul that everywhere they go, people want to know who they are and so on.

The most touching scenes are of Simkins the child, playing cricket in his fatherâ€™s sweet-shop in Brighton, spending his holidays at the county ground in Hove trying to get autographs or constructing an entire seasonâ€™s county championship under his bed with a dice game. It brought back memories of another rather sad child who devised a complicated set of rules based on my calculatorâ€™s random number generator so that I could play cricket during maths lessons.

Ah, Howzat. Every cricket fan has been there, though I found history the best lesson in which to steal the strike. What amazed me was how devastating Wacar Yewniss (for that is how my dyslexic friend spelled his name) was. Even in fantasy land, he sent down toe-crushers. I think my worst was 2 all out. And did anyone else play table football with a 10p piece? (also available in rugby and hockey editions, depending on your inventiveness in creating goalposts with your hands). Halcyon days.

Yes, it’s true. It exists! It’s about proper beer and proper cricket and it’s all in one pint-sized hardback piece of goodness.

There are many books about cricket and many on beer, but this is the first book to bring the two subjects together. Leading beer writer and cricket enthusiast Roger Protz has visited the major grounds of all the First Class counties to prepare in-depth profiles of them – their history, museums, memorabilia and notable records. Many of the museums, including Lord’s, Trent Bridge, Taunton and Old Trafford help trace the history of the game with fascinating collections of ancient bats, balls, blazers, books, caps and trophies. “The Beer Lover’s Guide to Cricket” also details some of the great cricket victories, including Jim Laker’s 19 wickets in a Test; Botham’s remarkable feat at Headingley in snatching victory from the jaws of defeat against the Australians and the pulsating 2005 Ashes series. The pleasure of each visit is rounded off with a detailed description of the best pubs in the vicinities of the grounds and the real ales they sell. The book also traces the fascinating story of the birth of the modern game at the Broadhalfpenny ground in Hampshire opposite a pub, the Bat & Ball, and shows how the tradition of good beer and cricket is kept alive at many grounds.

One of my early memories of cricket is watching Paul Smith tear in to bowl off an inordinately long run-up, arms flaying around, long hair, “flinging” down his medium pacers. He was nothing special but the rebel in me respected his unconformity. He was rock’n’roll, a bit crazy, and just the type of cricketer an 11-year-old tried wished he could be. And it turns out he’s written a book. It could be very, very dull; he fell into drugs, lost his wife and children and so forth, so it might be one of those sickly autobiographies in which he’s found God, or peace within himself, or finds knitting a good way to stave the cravings. If and when I get a copy, I’ll let you know what it reveals – or buy your own from Amazon, and help pay for the exploding costs of running this site…

I’ve mentioned this book before but only started to read it today, on the train. When your life is consumed by a subject such as cricket, you do become very critical of the (many) books out there. They tend to blur into eachother, forming one big cricket book blob of stats, cliches and annuals.

Fortunately, this makes the best shine even brighter and Harry Thompson’s Penguins Stopped Play is a perfect example. It’s colourfully written, with an easy, flowing dialogue and a great story. Best of all, as Thompson was such a gifted comedy writer, the book is lighthearted with some genuinely funny moments. I’ve not yet reached chapter three, so it could all go downhill dramatically. But I doubt it. Get it.

A couple of photos from Angus Bell, Scot-born-but-living-in-very-snowy-Montreal and author of Slogging the Slavs.

A Slovak googly grip. In the village of Hajske, cricket has become the #1 sport. Five minutes before an international Twenty:20, Slovakia’s wicketkeeper demonstrates the complexities of legspin. Fellow international cap Stalin sits behind. The Slovaks consume plum brandy at drinks break. Here, the next batsman in feels the effects on camping tour in Prague Angus’s book, Slogging the Slavs: A Paranormal Cricket Tour from the Baltic to the Bosphorus

, is available at Amazon and in bookshops around the UK.

With the World Cup mere days away from starting proper, it’s definitely time I flung you some freebies. Four copies of Harry Thompson’s excellent Penguins Stopped Play: Eleven Cricketers Take on the World and, a month in advance of any shop, it’s in paperback. How fortunate you all are to read this blog. Many thanks to James Spackman and the good folk of John Murray.

Your starter for five is either:

1) West Indies are hosting the Cup

2) They say the World Cup is wide open

Weâ€™ve run a few limerick competitions in the past which have gone down well. For those not sure of the style a limerick takes, itâ€™s really simple: using one of the two starting lines below, construct a five-line verse with the rhyme scheme of aabba. See here for ideas. Or here.

Get to it. And don’t forget, if you don’t win, snag a copy from the shops.