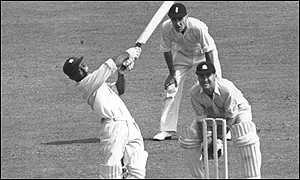 I really want the West Indies to win this Cup. I’d like England to do well, of course, but the Windies were the team who first got me interested in the game. This is their big moment. Let’s hope they can rise to the occasion and expectation. And if they needed further inspiration, Frank Keating provides one example: today, on the opening day of the World Cup, is the 40th anniversary of Sir Frank Worrell’s death.

Was it planned, or is it a tenderly harrowing and symbolic fluke that today’s Caribbean cricket carnival begins on the precise 40th anniversary of Sir Frank Worrell’s death? The West Indies today, and for the next two months, unites as a single entity – as it only does in its cricketing – to show its collective soul and spirit. You could say that no man was a more crucial catalyst than Sir Frank in establishing and stabilising the very cohesive essence of West Indies cricket, which is actually made up, of course, from a scattered comity of islands in the Gulf of Mexico each with disparate governance, character and cultures.

That awe-inspiring team which so bewitched me in 1950 was, as official custom presumed – indeed ordered – captained by a white man. The controversy was clamorous, the colonials appalled, when, at last, they were forced to anoint the black man, Worrell, with the seals of office. His first team, in Australia in 1960, enraptured all sport; his second, in England in 1963, remains probably the most disarmingly popular to tour here. At its end he retired, saying: “I charged myself with moulding a team from a lovable rabble of brilliant island individualists. I think I did that.” He retired to the groves of academe and died, wretchedly of leukaemia at 42, on March 13, 1967. Today’s a day for trumpets all right.