But surely after the era of Ian Botham – who allegedly broke a bed entertaining one young maiden – there ain’t no misbehaving. “Of course it goes on,” smiles [Michael] Vaughan, “it just isn’t reported.”

Sh-sh-sh-shocking. From today’s Driving section of The Sunday Times in which Vaughan talks about his order for a Jaguar XK. The git.


Great view. I went to Kew for the first time since I was four-years-old with a friend last week, and walked past this ground. Looks a great place to spend an afternoon and, if I had some money for a bus, I’d mosey on down there. 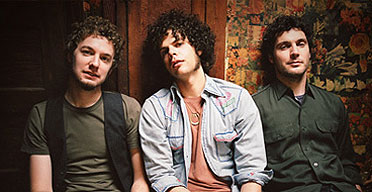 One great aspect of London is hearing about bands which would otherwise pass you buy. On the tube last Friday, I grabbed a copy of the Guardian’s music section which had been stuffed unceremoniously down the side of the seat. I don’t read any one particular newspaper by default, and on first glance this was a damn good music supplement. Not stuffy, not traditionalist or “why aren’t you listening to this already, you twat” sentiments. It just had interviews and articles and let you make your mind up.

In it, it had an interview with the frontman from Wolfmother, an Australian band trying to ressurect the raw, unprocessed sound of rock. Some recent bands have tried to do this with disasterous and embarassing results. It sounded (pardon the pun) too good to be true, that a band from 2006 had the intention of recreating the sound of Black Sabbath…

I was on holiday and saw this Sabbath tribute band,” says the singer of Australia’s latest hard rock export, Wolfmother, his enormous, corkscrew mass of hair quivering in the inappropriately library-quiet atmosphere of a Sheffield curry house. “These guys were over 40, overweight and middle-aged. But as soon as they played Paranoid, they turned into rock stars.” The tiny venue, he recalls, “turned into an arena”.

In the autumn of his youth, Andrew Stockdale experienced an epiphany in the satanic form of Black Sabbath. Well, not Black Sabbath themselves, but a band who sounded like Black Sabbath. “I was on holiday and saw this Sabbath tribute band,” says the singer of Australia’s latest hard rock export, Wolfmother, his enormous, corkscrew mass of hair quivering in the inappropriately library-quiet atmosphere of a Sheffield curry house. “These guys were over 40, overweight and middle-aged. But as soon as they played Paranoid, they turned into rock stars.” The tiny venue, he recalls, “turned into an arena”.

A while later, Stockdale, then 24, was visiting his friend Chris Ross, now Wolfmother’s bassist. He had one request: “Have you got any Sabbath?” The Brummie legends’ greatest hits were slapped on the CD player, and when a track called Wizard came along, Stockdale’s calling was complete. “I said, ‘Man, if people played this style of music now it would just go off,’” he remembers.

So I bought the album and, on the first two listens, it’s damn fine. It’s not Black Sabbath although there’s a definate hint running through the album demonstrating their influence. Anyway, this has nothing to do with cricket – other than the frontman looks like Andrew Symonds. There, see? Cricket can infiltrate any conversation you wish.

So, go and buy it. What are you listening to at the moment?

So England have been awarded the 2019 World Cup. After the disasterous “only we can do it this badly” performance in 1999, I hope we actually plan it this time. Depressingly, I’ll be 37-years-old when it comes round!

Also they’ll be staging the inaugral Twenty20 World Championship in 2009, the same year Australia are touring here, which ought to be brilliant.

Meanwhile, the Twenty20 World Championship, which will be given a trial run in an invitational tournament next year, will coincide with Australia’s next visit for the Ashes.

In a model used for Twenty20 Cup finals day in county cricket, a match starting at 1000 GMT would coincide with evening in Australia and New Zealand.

A second game at 1400 would meet prime time in Pakistan and India and a final match starting at around 1800 would be ideal for TV viewers in the UK.

Did the bulletin for this game today which, let’s be brutally honest, wouldn’t register too high on most cricket fan’s “must watch” list. It was, however, a fascinating game but for all the wrong reasons, for it highlighted the West Indies failings even more starkly than ever before. In my eyes, anyway.

Zimbabwe are frankly no more than a county team. I would expect every county in England to beat them at least six times out of ten, convincingly. And that’s not doing them a disservice; they aren’t very good, they’re extremely young and have scant experience to call on. Yet somehow, they managed to make West Indies look like a bunch of amateurs. All in all, in terms of standards, it was a quite dreadful game of cricket.

To make matters worse, the pitch was diabolical to bat on. Variable bounce (skidding low then taking the splice of the bat) was the main problem to affect the batsmen. That Zimbabwe even managed to reach 150 was a fine effort – they could have been bundled out for about 60 had the West Indies wanted to. Fact is, they were bored, disinterested and lacklustre. They didn’t seem to care enough to take 10 wickets; it wasn’t so much complacency, or understimation of Zimbabwe, they just didn’t look alert and refused to boss the game. They should have done this and they didn’t, and I cannot explain or reason why this is.

Instead, they sat back and waited. Zimbabwe, who have a few obviously talented batsmen, are so inexperienced that they weren’t sure how to increase the run-rate. After losing their opener Piet Rinke, they closed up and batted for time (and that’s fair enough. playing to your strengths and all that). But you’d have expected the West Indies to come at them hard; to show them who was boss; to nail throws from the boundary right above the bails; to intimidate the weaklings and say to them “Yeah. It’s tough, international cricket. You might only be 18/20/23 years old but we’re not here to have a tea party, we want to win.” But no. Nothing. Nada. Only when their captain, Terry Duffin, and Justice Chambawamba (sorry, forgotten his surname) were dismissed did the Windies wake up and realise they really ought to take the remaining wickets.

To compound the farce, they then lost five wickets during their chase. Five? What odds would you have given on them losing two, let alone five? They’re only chasing 152 for fuck’s sake! Prosper Utseya bowled very well indeed – at good pace for an off-spinner, too. Young spinners often bowl too slowly – partly due to their bodies not yet maturing fully and their tendons in their wrists not being strong enough – but this chap Utseya was excellent, really impressive and showed a lot of guts.

Utter complacency and arrogance though from the batsmen; Morton’s lazy swish in the first over was bad enough, but Ramnaresh Sarwan’s jogged-single, causing him to be run-out, was absolutely incredible. If schoolkids made such an error, they’d be dropped from the team or given 1000 lines or 100 press-ups. It said to those watching “can I really be bothered”? Tony Cozier, commentating on TV, said of the incident: “[it] epitomises the state of West Indies cricket”. It’s hard to disagree.

All in all, a rather sad state of affairs. I’m fond of West Indies cricket, very much so – and I’ve made mention of my frustration before. But today, I don’t know…somehow I feel even less enchanted with them. I know they have problems with the WICB and I know there are constant, ongoing disputes and money problems and all that crap. But they have a group of players, good players, none of whom seem able to perform consistently – even against what is effectively an amateur team comprising teenagers and early 20-year-olds.

Another day, another one-day tournament, this time between two troubled nations. West Indies ought to sweep Zimbabwe aside, but there’s still the possibility of an upset. As Betfair note, though, it’s rather unlikely. 
I wouldn’t fancy batting on that…

The difficult-to-please types at Cricinfo clearly don’t care much for the artistry of Stephen Fleming, but I was well pleased to wake up to find that he had smited the South Africans. And if James Franklin can finish off his century this morning, that will be even better.

Rejoice in the suffering of South African cricket here, or South African fans are free to remonstrate. However, any complaints about the wrong-headedness of this post will be thoroughly ignored.

Jolly splendid teams though they are, me and my boss are absolutely suicidally bored watching South Africa against New Zealand. We would welcome any amusing tales, jokes, limericks. I’ve resorted to whistling Rolf Harris tunes (I only know one), and mumbling nonsense. To make matters worse, the bloody clouds have lifted here in London and it’s horribly blue and sunny outside. How dare it be so inviting.

Me bad. Sorry I’m late. I think Will might dock my wages.

Mark Cosgrove has made his ODI debut for Australia, making his niche as the fattest man to play for Australia since Greg Ritchie.

Bangladesh are 81 for 4 after 30 overs, and have a lot of problems ahead.