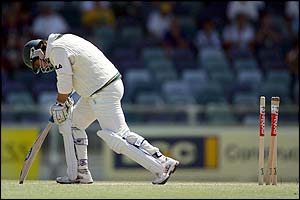 What a player. Doesn’t look like Pakistan bowled well, at all – Langer fell for 97 in the second innings, and 191 in the first. Handy knocks for an opener…Pakistan 18/1 and facing a streamrolling defeat, as you’d expect. Not even the Aussies would deny they have serious talent, as a cricketing nation – but it’s sporadic, sometimes unorthodox and their team has about 4 different mindsets and THEY don’t even know which team will turn up! No wonder Bob’s spitting blood.