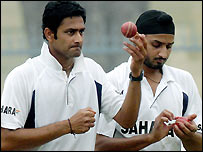 Anil Kumble is just 4 wickets away from breaking Kapil Dev’s record. (incidentally, just noticed at Cricinfo that his full name is Kapildev Ramlal Nikhanj). A marvellous achievment from Kumble, one of my favourite bowlers and who I modelled my action on when I was bowling.

Meanwhile, the 2nd Test is due to start in about 16 hours. As usual India are under pressure(!) to win, especially as they were considered favourites at the start of the series. South Africa’s tactics in the 1st Test were one of defence and obdurity – more interested in saving the Test and not even thinking about winning it. Their lack of confidence with themselves is remarkable – it wasn’t long ago they had Pollock & Donald, an awesome fast-bowling combination, and were the only team who could take Australia to 4/5 days. This new mindset bodes well for England’s trip in a month’s time – how will SA cope with England’s attacking play?

It’ll be interesting to see if India can really attack tomorrow from the outset, and dominate the match from ball one.