I’m about to sit down and watch Nation in Film, that BBC programme of West Indies’ tour in 1976. And the following teaser was uttered by Darcus Howe, one of the contributors. 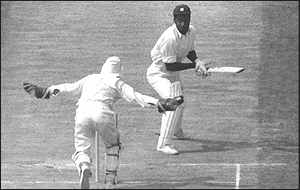 Is the same true of West Indies now? Does the success of a national sporting team reflect the successes or failures, depressions and moods of society? If it did back then (Howe says that Tony Greig’s “grovelling” comment was, in West Indians’ view, distinctly racist: white versus black), the effect is certainly less so nowadays.