Yesterday, I commented how I thought it difficult to see how a result was possible in this game. 24 hours later and England have a distinct chance of winning, playing some outstanding cricket – their best day all series.

Today was the day when the real England turned up. They had threatened to do so all series, but have been 80% at best – today they exceeded themselves. 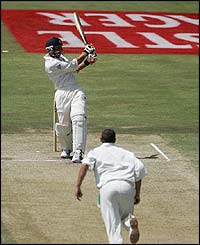 Thorpe and Flintoff batted very calmly and patiently – hardly scoring over 2/over – but both walked back to the hut at lunch. After lunch, Flintoff showed why he’s such a crowd favourite in England by going from 30 to 77 in quick time. Both were out quickly, and Geraint Jones played a memorable knock of 50 (and another 50 partnership with Giles who, incidentally, is averaging around 25 with the bat this series)…a gem of an innings from only 52 balls. He is a fine & destructive player when on song, and South Africa are lucky that this was only his 2nd 50 of the series.

This all meant England had a lead of 112 – not what South Africa had planned at all. After his innings of 77, he opened the bowling and produced yet another superb bit of cricket. Man he’s a terrific cricketer! Gibbs was unlucky to be given caught-behind, but Hall – bizarrely promoted to 3, presumabely as a pinch-hitter – was clean bowled to leave South Africa trailing by 53. They are, in effect, minus 53-2 going into Day 5. The way Kallis played (19 at a run a ball) suggested he was frustrated and demoralised – even he, the great Kallis, took very risky shots…South Africa MUST just knuckle down and beleive they can draw it. England, rightly so, beleive they can win this series 3-1.

South Africa look a team in shock. Before England arrived, South Africa refused to concede they could lose against them. I don’t think they took England’s status as 2nd best side in the world seriously but now, in this 5th Test, they look tired and jaded and disillusioned. Odds on for a draw unless England can snaffle out 2+ before lunch.

Either way – only a miracle will save SA from losing this series. Not since 1964/65 has England won a series in South Africa, and only Australia has beaten them at home since their return to international cricket in 1991.