Highlights of the first semi-final between Pakistan and New Zealand.

Some highlights for those who haven’t seen them of Yuvraj going a trifle berserk against Australia in the second semi-final. 70 from 30 balls! What game is this?

Click here if you can’t see the mayhem. It’s really quite massive.

Dear, dear – oh dear oh dear. The premise behind this tacky-sounding DVD is either a stroke of ingenuity or a bear trap. The DVD promises “a bumper collection of cricket gaffes and goofs” which have been “proudly picked by the Barmy Army”.

In how many of the gaffes will the presenter be appearing, I wonder? Place your orders… 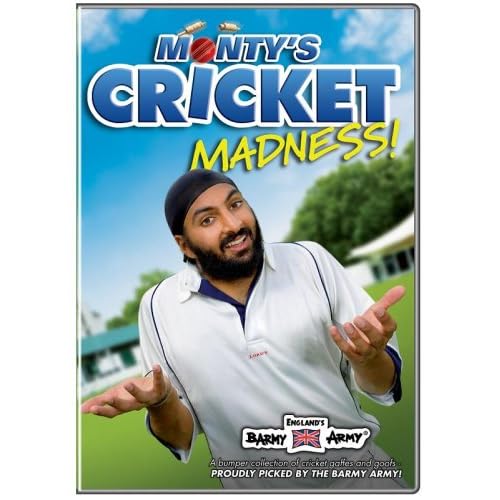 So, the semis are upon us. I’m hoping to at least catch some of today’s games, either on radio or a pub TV, and I’m gunning for the Pakistanis. As my colleague Osman says, this game really is suited to them. Why? Well, partly due to their experience in the format: tape-ball cricket.

The number of overs isn’t important; matches last from five to 25 overs. There are few rules but the basic ethos of these games, the hustle and the bustle of it, the short, sharp intensity of putting one over the boys from the next lane or mohalla because, well, that’s just what men do, is something Twenty20 comes close to capturing.

Runs are not scored but nicked. A little tap, run; fielder about to throw, steal the second; often the only boundaries are straight because of the narrowness of the field, so running becomes an art in itself. Pakistan’s batting successes against Sri Lanka and Australia were built on cheeky running first and boundary-hitting second.

They face New Zealand in the first match (scorecard), followed by Australia and India (scorecard) later in the day. So keep an eye on the scorecards and offer your thoughts as the matches unfold.

I am looking for an anecdote about Tony Lewis suitable for inclusion in a Christian recipe/devotional book to go with the recipe Glamorgan Vegetarian Sausages. Any ideas?

South Africa really are a most monumental, unabashed, incomparable Eddie[1] of winning bottlers ever conceived. You have to laugh, really. I’m assuming they’ve lost, having only just been informed by a surprisingly demure text message which read: the boks have done it again.

[1] My suggestion for the collective noun of losers: an Eddie (the Eagle) of losers Bob Willis is never short of opinions. Not all of them are conventional or even particularly thought through, but writing in the latest issue of The Wisden Cricketer he has slammed just about everyone. Ageing players such as Graeme Hick, Mark Ramprakash and Dominic Cork are wasting the money the ECB “create” through their revenue streams, thus impacting on the next generation of England stars.

I don’t have much of an issue with these three, or indeed for any ageing former England player – so long as they perform and contribute to the team. Ramprakash continues to be as prolific a batsman as any – Hick less so, but nevertheless is a reassuring face in a brittle Worcestershire line-up. If their frail frames falter, then goodnight – but so long as they’re producing the goods, their experience is invaluable to younger players.

The Kolpak issue is altogether different, and I suppose I’m contradicting myself if I can allow old English players to play rather than old non-England-qualified Greek/Australian players. But there must be some form of regulation (which, admittedly, comes into force next year) for the selection of third-grade Kolpakians. It’s out of control and impeding the progress of young English talent.

Willis is really off on one, which is always enjoyable to read rather than listen to. Cricinfo has a synopsis and we’ll have the piece up either this weekend or next. Offer your thoughts below.

Filthy, disgustingly massive sixes these. Just have a look how far they go.

Gluttons for punishment who can’t see the above video should click here. Furthermore, read Cricinfo’s comms of his innings.

Sri Lanka crumble. Sounds like a tempting pudding, that. They’re 80 for 7, Australia running through them like maniacs. Are they suddenly up for this match? Seems so. I’m not watching, but might force my German friends to listen to it on TMS later. Jawohl!