I know I’m ranting a lot lately – normal cricketing service shall resume shortly. But I must just get this off my (spluttering) chest. I’m watching Tim Henman, which often induces sporadic fits of frustration in me. Onwards…

I have a tendency to look a bit rough-and-ready at the best of times. Therefore, when I’m ill I closely resemble a homeless person. Incidentally, that’s probably politically incorrect. “A less homely person”? On a similar point, did you know “disabled” has all but been banned? Those lacking ability, or movement, are “less abled” which, from my time at the NHS, was met with guffaws by the dozen of so wheelchair-bound patients who I worked with on a daily basis).

Anyway, with a four-day beard and genuinely feeling like a dog, I marched into my local surgery. “Hello, would it be possible to see a Doctor? I think I’m about to die” weren’t my exact words, but it was plain as day that I was clearly not there to make up the numbers, or offer her a discount on a handmade cuckoo clock from Milton Keynes. Nor do I have a taste for ketamine or other bizarre drugs: I just need some antibiotics. Here’s what she said.

“We don’t have any doctors here today.”

WHAT? You’re a fucking surgery. Your signpost outside clearly states you are not only open now, at midday, but that you will be open until six. Open but Doctorless – welcome to (Old) Labour’s vision of how to reduce an ageing population: kill us all before we reach 65. How, then, can she help me?

“You can come back tomorrow. We should have a doctor then.”

Terrific. That’s just brilliant – just brilliant. My problem with this is twofold: there are many, many other people who are far, far worse off than me. What would they do? Not a bloody lot I imagine. Secondly, could she have been any less helpful? It’s all about numbers, figures, databases, and targets these days. When I was at the NHS, we were similarly crippled in booking patients on for operations or clinics, but every day we made exceptions where possible.

The seeds of England’s affable uselessness (“It’s OK to be beaten by
Mahela Jayawardene and chums: they’re a good bunch of blokes”) were
sown on the last tour of Sri Lanka in 2003-04. Nasser Hussain spotted
the danger: “I had watched how matey some of our players were with
Murali, particularly Freddie Flintoff,” he wrote in his
autobiography, “and I became concerned that this was having an
adverse effect on the side.” Hussain’s decision to get nasty as
Murali walked out to bat in the second Test at Kandy came about
because “I wanted him to feel he was in a hostile environment, not a
friendly one.”

This is not to suggest that England start calling a member of the
opposition a cheat, as Hussain did. It is merely to illustrate that -
in the absence of a hard-nosed leader – England have lost their bite.
The Spin observed the off-field interaction between the English and
the Sri Lankans in this summer’s Test series very closely and it kept
reaching the same conclusion: Flintoff needs to add steel to his
repertoire, otherwise he will always hover in a lower captaincy
league than Hussain and Michael Vaughan.

Spot on. Mateyness has no place, especially when we’re losing so spectacularly. They all need a royal kick up the backside.

Oh whoop-de-doo. A glitzy, effortless, boundary-laden 34 is not what England need. 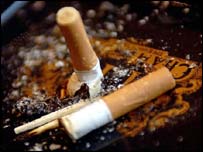 Not from my job, or from blogging. But from the bastard hell that is otherwise known as smoking. I said I’d give up this year and, six months down the line, I’m nowhere near close from stopping. But following the tremendous cold I’ve picked up this past few days, it’s now moved down to my chest. So…enough’s enough.

Watch out people of Barnes, people of Hammersmith and in fact anyone who gets in my way over the forthcoming weeks. I don’t know how I’ll react to a nicotine-less life, but it could be disasterous for many people!

I must say, this has been brewing in the back of my mind since England lost the first one-dayer at Lord’s. But I avoided mentioning it in either of my verdicts as I felt it was not only premature, but too controversial. Enter Tim de Lisle who, handily, has done it for me, and rather more directly and eloquently too:

6. Replace the coach
Some players are just better suited to Test than one-day cricket. Some coaches are too. Duncan Fletcher was a handy one-day player himself for Zimbabwe, but his style as a coach – patient, methodical, painstaking – is better geared to Test cricket. With the help of central contracts, four-day cricket, Nasser Hussain and Michael Vaughan, he has changed the culture of the Test team. But he hasn’t done much for the one-day side. He should either have a rethink or step aside for someone with a real feel for the one-day game. It could be someone Fletcher would approve of, like Andy Flower, already a mentor to Chris Read and Alistair Cook. Or it could be someone Fletcher wouldn’t approve of at all, like Adam Hollioake. Desperate times, desperate measures.

Who to pick? Matthew Maynard, who some believe is the main in waiting for the top job? Tim’s right: Fletcher is too calm and methodical a coach to be sufficiently proactive (not reactive) in a one-day series. That’s the impression I get, anyway.

It quickly became apparent during my two outings to The Oval and Lord’s that there are certain “do’s” and certain “don’ts” in the press box, and at press conferences. I thought there would be; I wasn’t expecting a free-for-all and a punch-up if your question got ignored. Although that’d be fun…

Someone clearly lacking any dignity is Val Thomas, writes Ryan:

After Gangaâ€™s answer, Thomas wasnâ€™t satisfied so he followed up by asking Ganga who his â€œGodfatherâ€ was, an obvious reference to team selector Joey Carew. The idea was to embarrass Ganga because Morton was not selected in the final XI.

As an accredited journalist covering the Test, Thomas has the right to ask any question. But, in his haste to make Ganga uncomfortable, he only served to embarrass himself.

This is the problem with what passes for journalism in the Caribbean and Thomas is certainly not alone. Thereâ€™s a Thomas in every country, a so-called journalist who puts on hometown blinkers and refuses to see rhyme or reason.

Thomas is a disgrace to the profession. A parochial, narrow-minded individual who decides to be disruptive because it serves his own insular interest.

Strong words, and he’s not alone either.

When the captain of your country (countries) turns up to lead you in a Test match, you have every right to feel confident in his ability. Confident that the selectors chose a born leader of men; someone with whom to go into battle. As captain, you also might expect to have a degree of confidence in the men you have chosen. WRONG. If you’re a West Indian captain, you have no say in such matters – pah! The very thought! – which, as Brian Lara is finding out, is a bit of a problem. Yes, the pitch can often be a lottery…but in “home Tests,” generally speaking, the home side holds the aces. They have a whole nation of cricketers to choose from. Not West Indies! Ohh no.

“My only concern is the combination for the final Test,” he said while analysing his team’s performance. “We played an extra batsman here but if you want to get 20 wickets, we need to put players there to get us those wickets. It’s left upto the selectors, let’s see what happens … Guys who’ve been here have done a tremendous job throughout this series, performing on surfaces that really haven’t helped them. Two days rest between Tests and to go back to the reserves and pick fast bowlers would be showing a weakness. Very confident with the likes of Corey Collymore, [Pedro] Collins, [Jerome] Taylor – coming into his own – and Bradshaw has been good. Maybe an addition would be a good choice and we will have the final decision a day before the match.”

The selectors must be loving it, rolling on the floor watching Collins, Taylor and co. all struggle to take the wickets. “If only they had another bowler, eh? Moohhahahahaha” they chortle from the hideaway selectors’ mansion, hidden inside a cave under the sea.

I was approached last year to edit The Googly, a new cricket blog, but in recent weeks it’s fallen into disuse. I simply don’t have the time. So they’re looking for someone else. Apply within.

Cracking Test at Basseterre, where India have been set 392 to win (final day). Come on Windies – this could be the start of something reeeeet special.

I know people die, and we will all be dead one day, but the news that my old Maths teacher has just died aged 51 is rather shocking. I didn’t particularly like the man, but he had an integrity which other teachers often lacked. Some years ago, his 18-year-old son died – and now he too has gone, albeit in unknown circumstances apparently. There’s to be an inquest and so forth before his funeral.

Maybe he just had enough fighting the pain of losing his son.