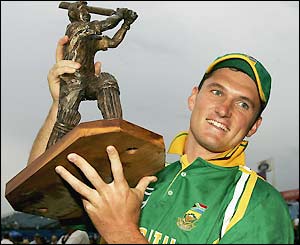 South Africa won the 7th ODI today convincingly, despite a crucial and outstanding catch by Harmison in the deep. It was probably the 2nd best outfield catch by someone of his height I’ve seen; the first was McGrath’s, a few years ago, hopefully someone here can fill in details of who it was against. Harmison bowled well too. Allan Donald, commentating at the time, remarked that he was in no doubt that Harmison would come good against the Aussies and he gave me (as an Englishman) some encouragment. Players do suffer dips in form – perhaps my, and other people’s, disappointed has been too greatly exaggerated – in part due to the expectation we had of him before this tour started. As I’ve said elsewhere, it would be a great shame for world cricket if he didn’t return to his best, because he’s something special – great fast bowlers are rare these days, and must be cherished and applauded.

So, the tour is over. As you can see at the bottom of the page, much of my posts since I started my blog (in November) have revolved around South Africa, but I’ve tried to include my thoughts on other countries and sides around the world. It’s very hard to remain impartial when you support a team (one’s country), so I hope everyone hasn’t been too bored by all my Eng/SA posts.

Finally – this tour was England’s (and world cricket’s?) busiest ever, and the players only just managed to keep fit. This is of course testament to their athleticism and fitness – but how long will it be before tours like these are a) commonplace and b) inflict serious damage on bowlers? We’ve already seen Flintoff return home with a serious ankle injury (albeit an old one). All this cricket is great for us “armchair addicts” – no doubt there’ll be some more fascinating cricket to watch in a few weeks at most – but we as spectators will be the losers if the administrators continue to ask cricketers to play so much cricket and end up injured as a result.