What a day. England began it on 263-4 – nightwatchman Hoggard and his struggling captain Vaughan – and it wasn’t long before Hoggard became 5th man out. Flintoff and Jones made 4, between them – Jones got a good one, but Flintoff’s waft was reminiscent of his younger days. 263-4 became 278-7 and SA were cock-a-hoop

Vaughan meanwhile was still stuck in the mud. Feet not moving and his head was wobbling around. Drizzle was falling, and it was getting extremely dark – a bowlers paradise and a batting nightmare. Just what Smith would have wanted.

Giles, Vaughan’s best mate incidentally, helped him through by attacking South Africa and running hard. Yet more poor captaincy and bowling by South Africa – not a yorker, slower ball or anything remotely full was bowled all session – allowed England to smash them around to all parts. Smith is not an instinctive Captain – field changes are only ever made in a reactive move, and I’ve lost count of the number of shots that have flown through 3rd slip and gully. It’s caution, caution, caution for South Africa – all the time. They are a nervous team, and quite honestly don’t deserve to be level in this series.

Harmison came in at 329-8 and SA completely lost the plot. 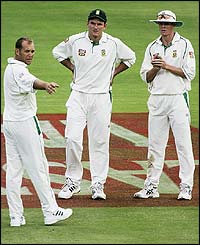 Again – no slower balls, no yorkers and no decent bouncers were bowled, as Harmison smashed Pollock & Ntini wherever he wished. He left good length balls with Atherton-like measure! Vaughan had finally found his feet, and regained more than a tenth of his form which I mentioned yesterday. 5 or 6 glorious boundaries, including his trademark cover-drive and short-arm pull through mid-on, and a brilliant 50 partnership between him and Harmison brought England to 411/8 when the real drama started…

…they went off for bad light! 16 had been taken off the over, and Smith was effing and blinding at being in this position. He had yet another chat with Steve Buckner who decided the light wasn’t good enough for the fielders. This was the best light of the day – the sun was shining, clouds thinning and the sky was blue! Vaughan was, understandably, a trifle peeved – 82* and approaching a superb hundred, running SA ragged. Bob Willis, commentating for Sky, said the decision was absurd and even suggested Bucknor should retire…which was perhaps a little harsh.

Vaughan, in his post-day interview was obviously confused and questioned the “consistency” of the decision, especially given how poor the light was at the start of the day.

Another of cricket’s ridiculous rules and lack of flexibility – and, possibly, a case of bullying by Smith who had lost the plot.

My other complaint of the day is with Pollock. He is a superb, fantastic seam bowler – a joy to watch. However, how many more wickets could he have taken in his career if he insisted (or wanted) 3 slips, all the time? Someone today suggested he’s more concerned in his average, and in conceding runs, than taking handful of wickets. Their whole tactics throughout this series have just dumbfounded me, sorry to go on about it.

Only 2 full sessions were played today roughly, and a win for each side which brings the total to Eng 3-2 SA