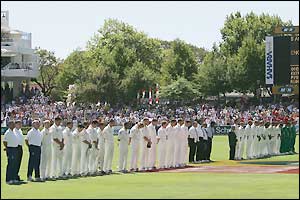 Graeme Smith smashed an Ashley Giles delivery into his pad which ballooned up to Jones. And Harper said not out. An admittedly dreadful decision – after all, it wasn’t just an edge, it was a smash! – but you wouldn’t beleive how Bob Willis and Nasser Hussain are going on and on about it. Get over it – damage has been done. Jeez…Bob really is a dull man. I remember Botham talking about his heroics in The 1981 Test, where Willis played a crucial part in dismissing Australia. He remarked that Bob often went into his own world, detatched from everyone (probably what professional cricketers now call “The Zone.” Stupid, modern terminologies – I hate them) – well, I don’t think Bob’s out of “The Zone” still…after 24 years. Stuck in a time-warp, complaining about “diabolical” over-rates and other fascinating things.

Oh – Smith’s out now for a well-made 74. There’s justice for you

Well bowled, and a good catch from Trescothick.

Nasser did make an interesting point re umpires though in asking the ICC why they are changed, during a Test Series, after 2 matches. I can see his point – Umpires need time out in the middle as much as batsmen and bowlers; to get used to the conditions, how bowlers approach the crease, how teams appeal. It does seem odd to suddenly change the umpires mid-way through the series, but I must admit I thought it was normal (?)

Another cracking day’s Test Cricket in Sydney. Another display of weakness by Pakistan. Australia dropped 3 (or more?) catches that I can remember (Warne a sitter at 1st slip) and were facing a disappointing end to the first day when Pakistan were 203-2 at Tea. At close they were 292-9! MacGill, as is his want, returned to Test Cricket and immediately took 5 wickets. What a player – he was born in the wrong era, poor old MacGill. He could play for any other country in the world, and would by now have played far more matches than his current 32. 150+ wickets in 30 matches is seriously good going.