I’ve converted a RealPlayer audio stream from BBC’s site to MP3 – much easier to listen to – of Agnew interviewing Ian Bell. Download here.

Update: Stephen Fleming attacks Mark Richardson, or does he?! It was a joke apparently.

Update: click here to listen to the MP3 of the race. 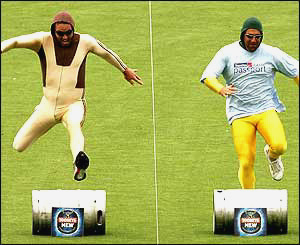 I think you’ll agree that this shows the true fitness of cricketers; lean, mean, sporting machines. Or not, as Mark Richardson and Darren Lehmann perfectly demonstrate here! This is a bit of fun Mark Richardson has introduced over the past few years – donning a full-length (swimming?) costume, and challenging the least-athletic of the opposing team, at the end of a series! Great fun

I’m very pro-Australian – suprising considering I’m English. But I respect their attitude towards sport, especially Cricket but Rugby too. This comment from the infamous Greg Chappell sums up their attitude and, in a sense, their lack of respect for England [via Daily Telegraph]:

“But England are confident because they feel they have improved.”

FEEL is the key word – Greg, we HAVE improved damn it!

The excellent Weblog over at CaribbeanCricket.com has an interesting post about the WICB. There never seems to be an end to board/player conflicts in the West Indies. I really hope things settle long before their 2007 World Cup, but the feedback from the supporters doesn’t look at all promising.

This made me smile…

“I don’t really consider myself a big-hitter. If you want to talk about power, talk about Chris Gayle of the West Indies – that boy is strong.”

That’s Andrew Flintoff talking – good thing is, I think Gayle would say the same about Freddie…and for what it’s worth, I think they’re both as powerful as eachother.

On India’s 2002 tour to England I saw a sign from an Indian supporter: Tendulkar the new Bradman; Sehwag the new Tendulkar.” It was met mainly with knowing nods from Indian supporters & polite smiles from the English. England knew of Sehwag’s talents, but were also aware of his faults and the chances he gave; he was/is such an aggressive player that he’s bound to give chances to the slips and gully (and even 3rd man for the “up and over”).

Things have changed though. The sceptiscm is now undeserved – you only need to look at his record. Remember, this guy has only played 28 matches…

Averaging nearly 73 in Test Cricket – as an opener! – is very good. It’s outstanding and pretty rare. If he continues at this rate, he could end up with over 8000 runs and 20 centuries and that old banner I saw in 2002 may not be so far off the mark

An interesting article at Cricinfo on Kallis’ hundred against India. In particular:

But before this tour something happened to change all that. Ray Jennings asked the team to talk about how they perceived each other, what they really thought, not just a facade. One of the newest members of the squad said of Kallis: “He’s a great player who doesn’t want to share his knowledge.” Kallis was stung: that just wasn’t the way it was at all.

A revealing insight into the mindset of cricketers and batsmen – and, also, perhaps, the pressure of sport and the pressure players put themselves under. Kallis is a wonderful player – over 6000 runs at nearly 54 is fine – but clearly his 16 previous centuries were immensely personal to him. He’s always struck me as a very intelligent, well-mannered, non-aggressive cricketer and someone who’d be first to help others (especially younger batsmen).

On a similar note, I think I’ll draw up a list of Cricket’s Failure’s – insanely talented batsmen who couldn’t cut it at the top level. (Why am I suddenly thinking Hick, Ramprakash, Kambli [Vinod?], Blewett…..)

Well played Ian Bell today. Can’t have been an easy week with all the political distractions, and the added pressure (albeit against the weakest side in international cricket) of it being his debut. He made an excellent 70, testament to his sound temprament and orthodox approach to batting

This is my tenth year of following Cricket. I haven’t missed many matches, perhaps 5 or 6, and I can’t remember any sporting situation so disasterous as the one England finds itself in currently. Michael Vaughan, as was rumoured yesterday will – in the event of Mugabe appearing at any of the matches – walk his side off the field, and the tour will be officially over. Apparently, the ECB are rapidly sourcing some backup funds (how the Cricketing Administration of the world would love to be Football Administrators – if only for a day!) in the event of a financial backlash (ZCU asking for compensation, that sort of thing). Utter mess. Countdown to ODI1, 7 hours (starts 07.30ish GMT).

4-0 please England. Nothing less do you deserve.

Although Zimbabwe Cricket is indesputably on the rocks, this latest announcement surely puts their future as a cricketing nation in genuine doubt. From The Sunday Times

It has also emerged that the Australian umpire Darrell Hair, a member of the ICCâ€™s international panel due to stand in the second game on Wednesday, has told the ICC that he does not want to officiate in matches in Zimbabwe again.